Our forthcoming Cardiff University Symphony Orchestra CD features a premiere recording of 'Symphony no 1' by Michael Csányi-Wills. Prima Facie are pleased to present an audio extract of Movement 1, and Michael Csányi-Wills and Mark Eager discuss how the symphony came to be written. 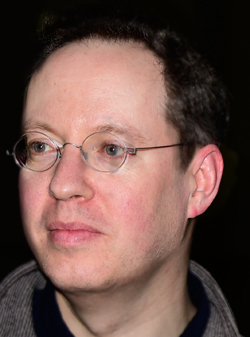 "Mark Eager asked me to write a symphony for the Cardiff university symphony orchestra back in September of 2017. I was honoured of course, but also apprehensive about taking on such a large work. I usually like to start with a narrative when I write, but nothing presented itself to me at the time, other than the day to day news both here in the UK and abroad. So while there’s no story to speak of, there is an undercurrent in the piece of a world sinking into a darker place in a rather sardonic dance like fashion, almost as if we’re willing it to happen.

I started writing with a single musical thread that wouldn’t leave my head. It was Handel’s D minor Sarabande from his fourth keyboard suite. It has a simple beauty and sadness about it, and yet there’s also a powerful weight behind each of those first chords. So I started experimenting with ways to refer to it in a much darker context; minor 3rd intervals between cellos and basses, with flute and clarinet lines providing a frenetic chaos above, decorating the changing harmonies underneath them. Once I had those elements, the music kind of wrote itself, and rather dictated the structure to me.

After 2 months of solid writing, I had a draft of a movement. I assumed it was the first, but realised very quickly that it was the meat and bones movement, and needed to be placed in the middle of the narrative, whatever that was going to be. It felt natural then to write a contrasting piece, to lie before this darkness, which became the sardonic dance of the second movement. I started writing with an image of smiling dancers, edging closer and closer to a cliff, oblivious of the danger.

I then decided to write the finale, bringing in the melodies from both the second and third movements to create as much chaos and driving energy as I could, building to an explosive ending. It opens with a burst of energy which tapers away immediately. Almost like a written echo, but using rising clarinets, which keeps you hanging. The string ostinato then reappears from the second movement but this time in a relentless 4/4, accompanied by the woodwind figures left over from the third movement. Eventually the ostinato develops into a motif based on the sardonic dance, which I copied into the brass, but this time augmented, slower and reversed, creating a new theme steeped in previous material.

I had a first draft now of 3 movements, a dance, a sarabande, and a finale. I needed an opening statement. Something of this world, not as dark, but perhaps something that questioned where we were going. I gathered the elements from all 3 movements and wrote an opening melody, which became an overture to the rest of the symphony. Something that would not have been possible had I written the opening movement first.

Writing a piece for Cardiff University Symphony Orchestra has been a wonderful opportunity to collaborate with a thriving music department, and share ideas and ways of exploring the music together to bring out the best in them and the music. It’s been a pleasure to work on and I very much hope the players have gained as much from the experience as I have."
Michael Csányi-Wills

Michael Csányi-Wills has written many works of varying sizes, ranging from solo instrumental pieces, to Jazz crossover concept albums to over 35 film scores. He was elected an associate of the Royal Academy of Music in 2012 and was composer in residence with the Welsh Sinfonia from 2013-2016. His orchestral works have been widely performed throughout the UK with various commissions taking him around Europe, Australia, China and the USA, where his violin concerto was performed by Tatiana Berman, conducted by Jose Luis Gomez for the Constella Arts Festival in Cincinnati, Ohio.

Toccata Classics released a disc of his orchestral songs to critical acclaim, recorded in 2015 which were performed by Nicky Spence, Jacques Imbrailo and Ilona Domnich, conducted by Mark Eager. One of these songs, The Last Letter has been performed numerous times across the USA, Australia, Canada, and Europe. His “Nocturne for Yodit Tekle” recorded by the Ukrainian Festival Orchestra, conducted by Paul Mann, will also be released by Toccata Classics in December 2019.

Recent works include 2 song cycles “The Long Lost Songs” and "12 Songs On Horizons Far” which form the basis of a collaborative project with James Robinson-May funded by the Arts Council/National Lottery. The aim of the project is to introduce both classical art song and concepts of autism in music to schools and centres of further education across the country. Also written in 2019, a feature length original score for the film Sideshow Starring Les Dennis and Anthony Head, to be released in 2020.

Michael was appointed head of composition at the World Heart Beat Academy in London in 2012 which supports talented young musicians of all backgrounds, awarding scholarships and bursaries to many children who would otherwise have no access to music. In addition to teaching and composition, Michael also conducts the WHB academy orchestra, and is associate conductor with the BBC Ariel Orchestra. Michael has also produced and engineered several classical discs for Naxos, Nimbus and Toccata Classics. 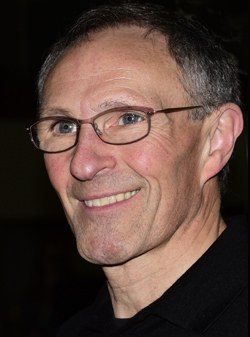 "Michael and I had an interesting introduction about 8 years ago - Michael’s father was at an ‘auction of promises’ dinner in the House of Commons where one of the auction prizes was to choose a piece to be played by The Welsh Sinfonia, conducted by me in a forthcoming concert. Michael’s father was the winning bidder and when our orchestral administrator asked him which piece he would like, he replied that he would like a piece by his son! At first when the management team heard this we were slightly concerned as you can imagine, however on researching and meeting with Michael, I found that he was truly an astounding composer and we immediately hit it off both musically and socially. After that first performance, I then asked Michael to become composer in residence with The Welsh Sinfonia, which he accepted. The relationship proved very fruitful over a number of years with many premieres of excellent and varied works. I have subsequently taken one work - Seagull Nebula - to Europe, China and Australia where on each occasion it has met with an enthusiastic reception (even if the Chinese did manage to mix Michael’s birth date on the programme with that of Beethoven!).

Having worked so closely with Michael over these years I felt it was time for him to write a symphony so I suggested he do so for another orchestra that I conduct, Cardiff University Symphony Orchestra. This way I knew I could programme it and record it, making it a worthwhile venture all round. Although it was written with a university orchestra in mind, Michael has pulled no punches in its technical challenges. Musically its harmonic language is at once understandable and the students have very much enjoyed learning it.

The symphony had a particularly well-received premiere in November 2019 at the BBC’s Hoddinott Hall in Cardiff and I hope by this recording that professional orchestras will become aware of its excellence and think about programming it."
Mark Eager 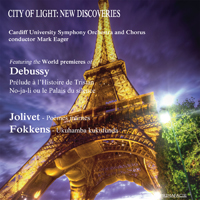 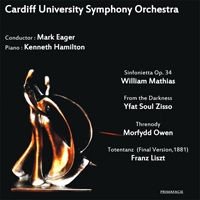