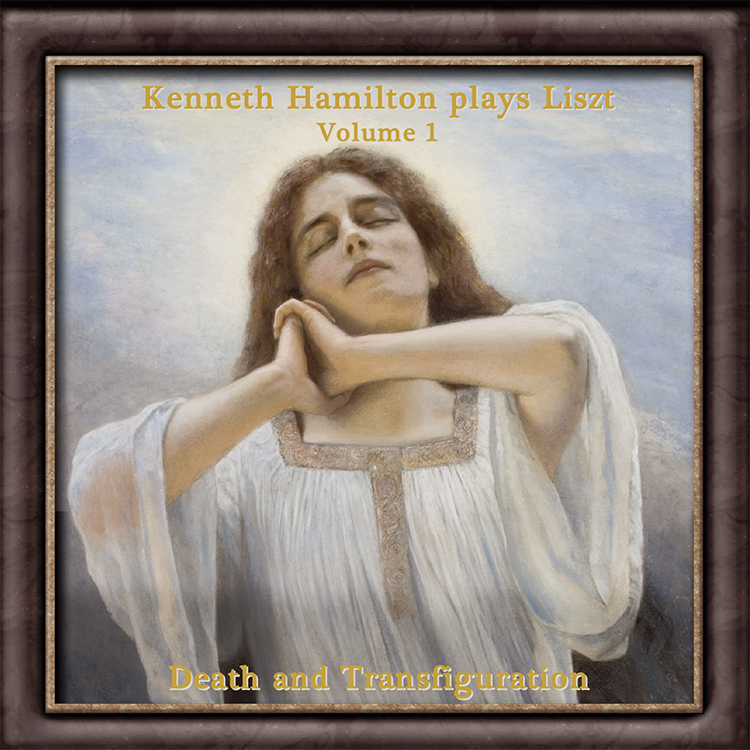 "This wide-ranging collection of Liszt’s piano music meets its technical challenges with rare directness and clarity... As in Hamilton’s earlier discs –his recordings of Ronald Stevenson’s piano works especially- there is always the feeling that the music comes first, that the performances are a means to an end rather than a self-regarding end in themselves, and that is both liberating and totally refreshing for the listener." Andrew Clements, The Guardian
"A magnificent release, its contents perfectly judged and delivered with a balanced mix of virtuosity and intellect.“ Colin Clarke, Classical Explorer
"Kenneth Hamilton knows how to turn a CD into a deeply engaging intellectual and musical experience. He is one of the great treasures of the classical-music world today." Ralph Locke, ArtsFuse
"A fresh look at the composer’s career… this is a recording that brings the listener closer to Liszt’s inner personality." James Manheim, AllMusic
"Magisterial... a close and personal look at Liszt’s own thirst for spiritual sustenance and regeneration, his response to bereavement and how he found his peace...There is not a single vulgar work or superfluous note in these 152 minutes of music." Dr Chang Tou Liang, Pianomania
"Masterly readings…the pianist is one of these rare mortals whose erudite, elegant prose is matched by his eloquence at the keyboard... I cannot recommend this release too highly" Jeremy Nicholas, Gramophone
"richly rewarding and brilliantly played" Gramophone Editor's Choice
"The playing here is superb. Kenneth Hamilton brings a numinous quality to Liszt’s music that is often absent in other performances." John France, MusicWeb International
"throughout Hamilton’s Liszt recital, the control of colour, the delineation of the voices, the different instrumental qualities he brings to bear are strikingly effective…the Romantic warhorses the B minor Sonata and the Ballade emerge refreshed. The whole recital flows thoughtfully from beginning to end, and the notes are as illuminating as the playing." Andrew McGregor, BBC Radio 3 Record Review
"Just as I was beginning to despair of ever hearing Liszt that really set the heart racing along comes Kenneth Hamilton... I don’t think I have ever heard an account of [the Sonata] that brought out so richly the fecundity of Liszt’s inspiration. I was transported to an epic voyage through a Byronic landscape with heart stopping vistas at every turn... What Hamilton seems to get, and clearly revels in, is the role of imagination in this music, that in comparison to our prosaic age, Liszt’s was a poetic one. Hamilton possesses all the technical prowess one could wish for but, listening to him, it is, for once, audible that the virtuosity of Liszt’s music is needed to match the excessive nature of his inspiration... The word I keep coming back to with this new recording is richness and that applies equally well to the recorded sound. It made me realise how often Liszt is recorded in the equivalent of a garish spotlight. This is like hearing Liszt in a candlelit salon, full of shadows for demons, assignations and prayer vigils." David McDade, Music Web International
“Kenneth Hamilton plays these pieces as a pianist completely familiar with the music, both technically and artistically. He employs, in a fashion as masterful as it is virtuosic, the entire gamut of pianistic expressiveness, but never goes over the top…And that is exactly what makes “his” Liszt so worth hearing. Without too much overloaded ballast, the music, immaculately realized, takes centre stage.” Guido Krawinkel, Klassik Heute

New insights abound, even in such popular pieces as the Sonata in b minor: Hamilton’s powerful recording reflects not only the interpretative nuances suggested by Liszt, but also adopts a strikingly moving revised reading of the Sonata’s final page. The luscious Lorelei likewise incorporates the composer’s later improvements, and the renditions of both Funérailles and Bénédiction de Dieu profit from Liszt’s detailed advice on tempo flexibility, arpeggiation and ornamentation. Insights extend to hidden meanings within the music, as outlined in Hamilton’s own notes to the recording. The wonderful second Ballade is revealed as a “love-death” anticipating by several years the Wagner/Liszt Liebestod that ends the album, while the fascinatingly intertwined relationships linking the other pieces are lucidly and elegantly explained. A truly remarkable recording.


You can read Kenneth Hamilton's sleeve notes from Death and Transfiguration on the Prima Facie blog, Recitative. 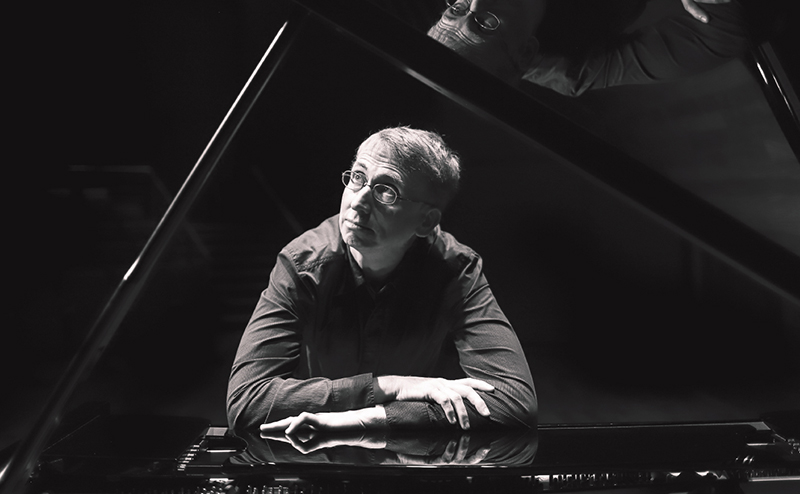 Described by the Moscow Kommersant as “an outstanding virtuoso−one of the finest players of his generation”, by the Singapore Straits Times as “a formidable virtuoso,” by Tom Service in the Guardian as "pianist, author, lecturer and all-round virtuoso", and by Stefan Pieper in Klassik Heute as a “pianist, scholar, maverick thinker and philosopher”, Kenneth Hamilton is well-known internationally as a recitalist and recording artist of emotional depth and striking originality. His CDs have attracted both critical acclaim and a large number of listeners worldwide. His best-selling 'After the Golden Age: Romantic Pianism and Modern Performance' (Oxford University Press) is one of the most influential books on piano performance in recent decades.

Hamilton is deeply grateful for his pianistic training in Scotland with Lawrence Glover and Ronald Stevenson, experience that later informed his recordings of Stevenson’s music. He has appeared frequently on radio and television in Britain, the US, Germany, France, Canada, Australia, Turkey, Singapore, Thailand, China and Russia, including a performance of Chopin’s first piano concerto with the Istanbul Chamber Orchestra on Turkish Television, and a dual role as pianist and presenter for the television programme Mendelssohn in Scotland, broadcast by Deutsche Welle Channel. He is a familiar artist on BBC Radio 3, Radio 4 and the World Service, and a keen communicator, enthusiastically promoting the understanding and appreciation of music. One of his most recent BBC broadcasts, in the series 'The Essay: My Life in Music', was described by Sir Nicholas Kenyon in The Observer as “Revelatory…touching...a personal story of loss and death that reaches out from the radio. That is what broadcasting is all about”.

Hamilton’s Chopin and Stevenson recordings entered UK Classical Charts immediately on their release. 'Preludes to Chopin' has now been streamed online nearly a million times, while 'More Preludes to Chopin' was chosen as one of Spotify’s “Best Classical New Releases”. Both have attracted widespread attention for the originality of their performance style. For Dr Chang Tou Liang of the Singapore Straits Times they offer “a new way of listening to Chopin”. Stefan Pieper (Klassik Heute) commented: “Hamilton’s approach to Chopin ignores the pianistic fashions of today’s music market, challenges the dogmas of historical performance practice, and offers an entire palette of new and intriguing experiences”, James Manheim (AllMusic) wrote: “The commercial success of this release shows how strongly audiences hunger for fresh interpretations of mainstream repertory, and a fresh interpretation is exactly what you get“, while Ralph Locke (ArtsFuse) remarked: “This is real music-making, not subservient reciting from a sacred text. Hamilton’s Chopin could change your whole attitude toward the role of the performer in classical music.”

Hamilton is Head of the School of Music at Cardiff University in Wales, UK. He is recognised as one of the world’s leading experts on the history of piano performance in general, and on the music of Chopin and Liszt in particular. He completed a doctorate on Liszt at Balliol College, Oxford (he is indebted to his tutors, Hugh Macdonald and John Warrack, for any scholarly skills he might have), and was commissioned to write the 2011 bicentenary article on the composer for the New York Times (a “fine, unsentimental appreciation” according to Alex Ross). His ground-breaking work, 'After the Golden Age: Romantic Pianism and Modern Performance' was a Daily Telegraph Book of the Year in the UK, a recipient of an ARSC award, and a CHOICE Outstanding Academic Title in the US. It was welcomed as “full of wit and interest, and written with passion” by Charles Rosen (Times Literary Supplement), as "brilliantly researched and beautifully written” by Stuart Isacoff (Symphony Magazine) and as “a delightful book” by Bernard Holland (New York Times). It has been translated into Italian, Hungarian and Mandarin.

As a teacher and mentor himself, Hamilton much enjoys passing on the flame to aspiring professional pianists. He has been a visiting artist and guest professor at many institutions worldwide, including the Franz Liszt Academy in Hungary and the St. Petersburg Conservatory in Russia, and gives regular masterclasses in China and the Far East.