Prima Facie Records is delighted to announce the release of 'The Eternal Song' (PFCD090). This CD includes Daryl Runswick's 'Variations for String Orchestra' (1980), 'Concerto for Piano and Nine Instruments' (2017) and a piano work, 'Gentle Do Not Care to Know...' (1998); it features Aleksander Szram, i Solisti di Londra, and a string orchestra including members of the Gabrieli and Delmé String Quartets. 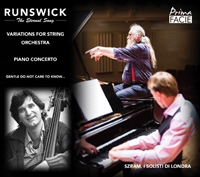 Two major works from either end of Runswick's career are highlighted on this CD. Following in the tradition of Mozart, the soloist in 'Concerto for Piano and Nine Instruments' (2017) not only plays from a notated score but also improvises. The concerto is built upon Runswick's fractal technique: every detail of the musical texture is constructed from a single five-note germ. This CD provides the live recording from the world premiere performance at Cadogan Hall in June 2017, when Runswick celebrated his 70th Birthday at a Gala Concert.

'Variations for String Orchestra' (1980) is dedicated to several of Runswick's friends, including the cellist Christopher van Kampen, who died in 1997. In contrast, the piano work 'Gentle Do Not Care to Know ...' (1998), whose title is taken from 'A Summer Night' by W H Auden, a poem full of foreboding of the onset of war, is dedicated to Runswick's father. Runswick describes how the composition process mirrored Stravinsky's comment, “I heard and I wrote what I heard”. Strikingly, despite the diversity of the works included on this CD, and the wide timespan over which they were written, all share elements of the same melody, as Runswick explains in the liner notes.

'Concerto for Piano and Nine Instruments' was recorded at Cadogan Hall in London on 6 June 2017.
'Variations for String Orchestra' was recorded at Roundhouse Studios, Chalk Farm, London, in 1980.
'Gentle Do Not Care to Know ...' was recorded at The Sign, Wales on 7 December 2017.

Composer/performer Daryl Runswick (b. 1946) was educated at Cambridge University and Ronnie Scott’s Club. He spent his early career writing and performing jazz and pop; more recently concert pieces. He has also been involved with free improvisation and indeterminate music, one of the few (to quote John Wickes) who can claim to have worked with both Ornette Coleman and John Cage. This duality has permeated his career as an improvising pianist, singer with Electric Phoenix, bassplayer, arranger, record producer, broadcaster, educator, community animateur and film/TV composer. Head of Composition at Trinity College of Music in London for 10 years before retiring, he has searched for a synthesis of the improvising skills of jazz with the more complex structures of concert music.