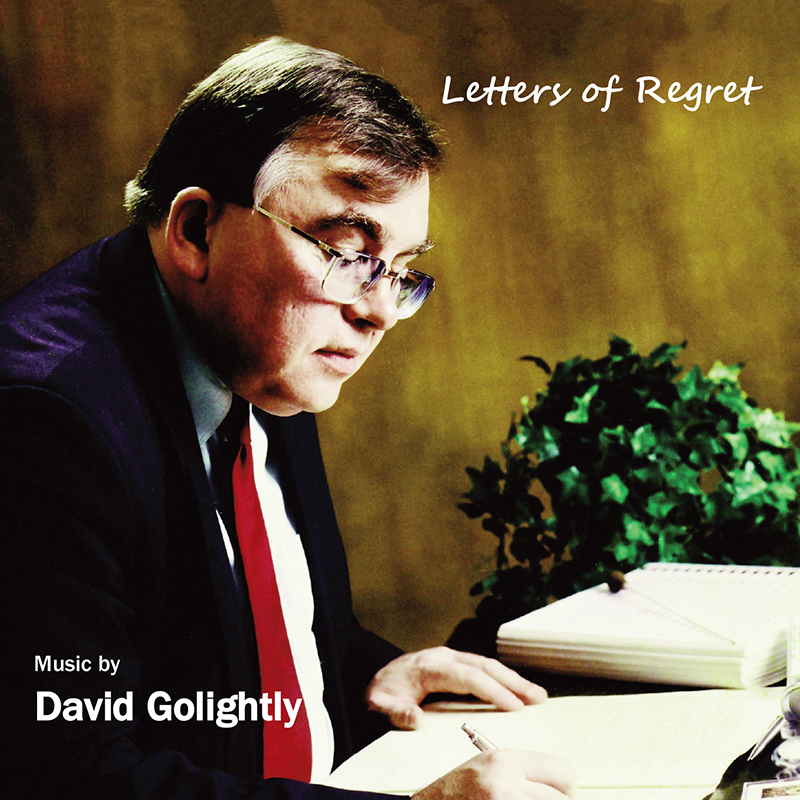 "I met David Golightly in the mid 1990s, when he was trying to set up an organisation to represent composers in the north-west of England. He succeeded, forming the North West Composers Association, and I was honoured to be David’s right-hand man in the early days – we shared a love of contemporary music (and football). David worked tirelessly for composers in the area, putting on concerts, releasing CDs, and attracting funding for a variety of successful projects, as well as composing prolifically himself.

Sadly, David’s life was cut short in 2018. I was approached by the executors of his will, Doug and Gillian Wright, to record his fabulous piano trio, 'Letters of Regret'. This I did, with the renowned Lawson Trio, and the piece lends its title to this this double CD, capturing the essence of David’s depth and musical vitality. After the recording of 'Letters of Regret’, I decided as a tribute to put together on disc all the music I had recorded with David. It’s a stunning collection in my opinion, and I am proud to be involved in this release. I am extremely grateful to Doug and Gillian Wright, Annabelle Lawson, Monica McCabe, Steve Robson, and engineer and producer Phil Hardman, who recorded the piano trio Letters of Regret." Stephen Plews, 2022.

Letters of Regret: The Lawson Trio
Recorded at The RNCM Concert Hall July 2021 Engineered, Produced and Edited by Phil Hardman.

David F. Golightly (1948-2018) studied composition with Richard Steinitz at Huddersfield University. He was born in Co Durham in 1948. A number of his compositions have been commissioned by eminent performers, including “Moods” for Roger Heaton, and “Rites of Passage” and “The St Petersburg Mass” for The Soglasie Male Voice Choir of St Petersburg” (premiered in 1994, at the State Capella Hall, St Petersburg). His music has been performed as far afield as America, Germany, Poland and Russia. To add to his credits, David was also acclaimed for the Baroque arrangements for the Rumanian opera singer Inessa Galante on her CD “Arietta”. Important premieres, recordings and commissions included the “Piano Trio" (Fenice Trio Recording), "Concerto for Strings" (Kiev Philharmonic CD recording ERM masterworks series, released June 2006), “Second Symphony” (dedicated to Serge Inkov Choral master Kirov (premiered 2006 St Petersburg Russia), Symphony No 1 ('The Middlesbrough', premiered by Royal Northern Sinfonia in Middlesbrough, September 2011), and "Housman settings for Mezzo Soprano and Piano" (premiered in New York, in 2011 – Emily Cobley Mezzo Soprano, Beth Levin Piano).

David was chairman of The North-West Composers’ Association, and a director of the British Academy. In addition, he was also one of the classical representatives for the PRS Advisory Group established to assist the company review its public performance and broadcast policy. This double CD is a celebration of the life and music of David, who died in 2018.