CD OUT OF STOCK 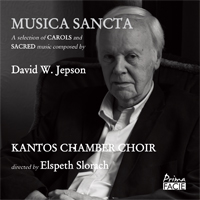 A few words of thanks from David:

'Known professionally as David W. Jepson, the W. in my name is not a pretentious affectation! It arises from the fact that, several decades ago a publishing company informed me that they would like to publish a work I had submitted, but it could cause confusion as there were at least half a dozen David Jepsons worldwide who were composers. Over the years I have been fortunate in having many of my compositions performed at home and abroad both sacred and secular. A fair number of performances have been recorded, but many were on tapes which inevitably fade with the passage of time. This CD is an attempt to partially redress the balance. Unfortunately, there is insufficient space to give a complete reflection of the variety of genres for which I have written. Consequently I have concentrated on selecting a few short choral pieces which fall into the category of sacred music. If all goes according to plan, I would like at some stage to follow up with another CD of secular pieces I have composed or arranged. In setting up this recording I have been greatly assisted by the support and advice I have received from John Turner, consummate musician, impresario and all-round benefactor. I am beholden to him for introducing me to some of his contacts. Among them, sound engineer and general organise, Steve Plews, organist and pianist Simon Mercer and last but not least, choral director Elspeth Slorach and her superb group of vocalists, Kantos Chamber Choir; between them they have set me on course to pursue the project. My appreciation and thanks goes to Rosemary Goodwin, director of Banks Music Publications and my main publisher over the years, for her constant support. Many thanks also to good friends Alan Byers and David Beavan, both ex Swingle singers for their encouragement and promotion of my music. From my early days as a rookie boy chorister at St. Pauls, Heaton Moor, I've always maintained a close association with my alma mater which provided me with such a thorough apprenticeship. I spent decades assisting in a singing or advisory choral directing capacity at Saint Paul’s, and over the years I have made many lifelong friends. I would like to convey my gratitude to Gordon Viney MBE, the organist who is in overall charge, and to the members of the choir for their patience. So often over the years, I have used them as guinea pigs, inflicting on then my latest composition prior to sending it for prospective publication. All this without a word of complaint (at least, not within my hearing!). Many thanks to them for their ineffable tolerance. Before my final thanks, I'd like to say a few words about the order of the presentation on the CD. It falls into four sections, alternating between carols and sacred music. Two of the carols include a recorder, which celebrated recorderist John Turner kindly agreed to play. I am greatly indebted to the Ida Carroll Trust (of which John Turner is a Trustee) for their most generous contribution of financial support towards the production of this CD.'
David Jepson

Kantos Chamber Choir was founded in 2015 by Ellie Slorach. The choir comprises the top choral singers across the North of England who have just begun or are about to begin their professional careers. Since its formation, Kantos has risen to the forefront of choral singing in Manchester and the North West. The choir prides itself on the originality of its concerts, performing both well-known and new compositions in innovative and exciting ways.

Simon Mercer began his musical life as a chorister at the age of 7. He studied the organ at Chichester Cathedral and the trumpet in London, moving to the University of Sheffield as an undergraduate, and to the RNCM for postgraduate study. Simon joined the academic staff at Junior RNCM in the early 1990’s; he has been the Organ Tutor for over 25 years. His passion, sympathetic and empathetic teaching style, great patience and experience, as well as a lively sense of humour continue to ensure great success and satisfaction for his pupils and the members of all his choirs.

John Turner is one of the leading recorder players of today. Born in Stockport, he was Senior Scholar in Law at Fitzwilliam College Cambridge before pursuing a legal career, acting for many distinguished musicians and musical organisations He has played as recorder soloist with the Halle Orchestra, the Royal Liverpool Philharmonic Orchestra, the Manchester Camerata, and many other leading orchestras and ensembles. Concertos and works with orchestra have been written for him by Gordon Crosse, Anthony Gilbert, Peter Hope, Kenneth Leighton, Elis Pehkonen, Alan Bullard, John Casken, Philip Wood, and many other distinguished composers. In the last few years he has played in Germany, Switzerland, Poland, France, New Zealand, Japan and the USA, and given many recitals on Radio 3 with pianist Peter Lawson. Many of the works he has premiered have now entered the standard repertoire, and these and his own recorder compositions are regularly set for festivals and examinations.

For further details of this recording, please see the CD booklet

David Jepson (1941-2021) was born and raised in Stockport. When he was 10 years old, in the knowledge that he had a good treble voice, his mother ensured that he joined the choir at Saint Paul’s, Heaton Moor. The music director was Geoffrey Barber, a superbly gifted musician and communicator, later to become a special commissioner for the Royal School of Church music. David went through the ranks to become head boy. As fortune would have it, Geoffrey Barber was also head of music at Stockport school and he mentored David through ‘A’-level and scholarship music, encouraging him to compose and write introits and anthems for Speech Day services.

Following this privileged musical start in life, David went on to study at the Royal Manchester College of Music. Here he majored in organ and composition, where his tutor was highly accomplished composer an artist, Thomas B. Pitfield. He also studied cello and singing.

As a postgraduate David studied at London University and at the Royal Academy of Music, where he read composition and qualified with an ARCO in organ. In his early 20s he was working part time for the Royal School of Church music, assisting in directing courses in various parts of the country. His first full-time appointment when he was just twenty-three was as head of music at Eccles Grammar School. Here he spent the next eight years, in one of the most fruitful and enjoyable experiences of his career in a delightful environment. In 1972 David transferred to the newly built Eccles six form college as Head of Music. With 70 concerts and music drama productions, there were many opportunities to put his composition and music arranging background into practice. These were highly enjoyable and rewarding days.

In 1992 David made the decision to embark upon the second part of his career. He had already been operating part-time as an examiner for the London College of music and he was now able to widen his scope, travelling around Britain and abroad and examining a full range of instruments and voices up to Diploma and Fellowship level.

For the first time in his career, David now had time to focus on the particular area with which he has so familiar; writing music. For a while he was producing pop choral arrangements for local radio stations and singing in choral groups on Radio 4’s morning service. Over his last 20 years he had many compositions accepted by a variety of publishers, mostly for voices, and works broadcast on national radio stations - 2, 3 and 4 - including a number of performances on ‘Friday Night is Music Night’.