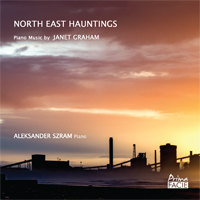 "A striking piano voice revealed... [Szram] plays the music with a genuine sense of engagement and a feel for Graham's style. I do hope that this disc encourages other pianists to explore Graham's repertoire and I wonder what other pieces she has hidden." Robery Hugill

Prima Facie continue their contemporary piano series with 'North East Hauntings' by Janet Graham, a neglected composer who was regularly broadcast in the 1980s and 90s. Composed in a unique style which fuses atonal influences with lyrical and often folk-derived melodies, this music has as much impact now as it must have done when first heard. This uncompromising music and its reference to the economic wasteland of the North East is a tour de force of composition and pianistic virtuosity.

Aleksander Szram specialises in performing music of the 20th and 21st Centuries, and has released several albums of contemporary repertoire on the Prima Facie label, including the Piano Concerto by Daryl Runswick, Inner Landscapes (Douglas Finch), A Land so Luminous (Kenneth Hesketh), and the album Aztec Dances with the recorder player Jill Kemp. He has recorded for Nimbus with the flautist Wissam Boustany, and released three albums of solo piano music by Runswick with Dazzle Music. He has given premieres of works by Rzewski, Fujikura, Kittos, Gregson, Bedford, Gregory Rose, George King, Carl Witt, Houtaf Khoury and Yevhen Stankovych among others. As pianist in the ensemble Gemini, he has recorded three albums with Métier, including works by Jonathan Harvey, Sadie Harrison, Huw Watkins, Philip Grange, and the first recording of Mandala 3 by David Lumsdaine. He has performed in more than forty countries over six continents, and teaches piano, chamber music and academic studies at Trinity Laban Conservatoire of Music and Dance, where he is a Senior Teaching Fellow.

Recorded and produced by Stephen Plews on 13th August 2018 at the Turner Sims Concert Hall, Southampton
Edited and Mastered by Phil Hardman
Sleeve Design by Prima Facie
Prima Facie is grateful to the Ambache Charitable Trust and the RVW Trust for their generous financial support

For more details of this recording please see the CD booklet

Janet Graham was born near Consett, County Durham, in 1948. She studied Composition with James Iliff at the Royal Academy of Music (1966-71), where she was awarded several prizes for composition, and later studied with Elisabeth Lutyens. She married the organist Philip Deane in 1973. During the 1970s and 80s she worked in London and Hertfordshire as a composer and piano teacher and many of her compositions were performed in London and elsewhere. Several pieces were broadcast on Radio 3 and radio stations abroad, and she was one of the composers selected for the BBC Young Composers' Forum in 1978. In 1989, after working voluntarily for several years at a psychiatric hospital in St. Albans, Hertfordshire, she decided to focus on trying to help people in the community through music, and trained as a music therapist at the Nordoff Robbins Centre in London. After qualifying as a music therapist in 1990 Janet worked as a therapist and course tutor for Nordoff Robbins and for the NHS in Hertfordshire before returning to County Durham in 2007 to establish some music therapy work in the North East.

Over her career as a music therapist she worked with most client groups, especially children and adults with learning disability and autism, including those with 'challenging behaviour', people with neurological conditions and older people with dementia. After retiring from music therapy in June 2013 she began composing again. She lives near Durham at Bishop Middleham, where she plays the organ in the village church and can sometimes be found singing or playing the organ, piano, fiddle or guitar at local churches, care homes, ceilidhs and small charity events. ​