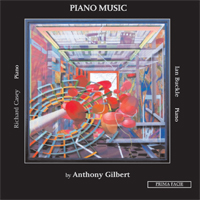 "Gilbert (1934) is a composer of striking inventiveness and probity... and this compilation of his works for solo and four-hand piano makes an arresting sequence. Casey plays... with outstanding flair and obvious sympathy."
Sunday Times 02/12/12

ANTHONY GILBERT was born in London in 1934. Initially working as clerk-translator and interpreter, he first studied piano at Trinity College of Music under Denis Holloway, then took up serious composition in his early twenties, studying first with Mátyás Seiber, then with Anthony Milner and Alexander Goehr at Morley College, London, and later with Gunther Schuller at Tanglewood. He first attracted public attention in the 1960s with a series of brilliant virtuoso works for small ensembles, performed in the international festivals.

Throughout his professional life, Gilbert has been closely involved in the promotion of performances of new music, with several long periods on the committees of the Society for the Promotion of New Music, the ICA Music Section, the British and Sydney Sections of the ISCM and the New Music Panel of North West Arts. He was Founder Member, Chairman and Artistic Director of New Music Forum, Manchester, and Founder and Artistic Director of AKANTHOS, the new music ensemble of the RNCM.