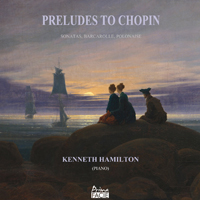 "This recording has a uniquely special sound, which drapes the music in a round, full, Romantic tone-colour.” Radio 100.7 Luxembourg review

"The phrase “joyous revelations” could perhaps sum up this release. One of the finest musical intellects around…Hamilton achieves what he sets out to do: to give modern performances absolutely in the line of their great forebears. Every single lover of the music of Chopin should hear this.” Colin Clarke, Fanfare

“Hamilton’s approach to Chopin ignores the pianistic fashions of today’s music-market, challenges the dogmas of historical performance-practice, and offers a whole palette of new and intriguing experiences. The recording shows that an enlightened spirit of inquiry and a subjective performance personality are not contradictory… played with flexible precision and captivating richness of tone-colour…Artistic Quality: 10/10." Stefan Pieper, Klassik Heute

Following the widely admired 'Back to Bach' and 'Ronald Stevenson' recordings by Kenneth Hamilton, Prima Facie are proud to present 'Preludes to Chopin', his remarkable new CD.

Kenneth Hamilton comments: “The inspiration for this recording is identical to the motivation for my book 'After the Golden Age: Romantic Pianism and Modern Performance': an abiding fascination with the styles of the “golden age” of piano-playing from Chopin to Paderewski, and how these approaches might enrich our performances today. I’ve used Chopin’s thought-provoking Preludes as they were originally intended—as exquisite prefaces to longer pieces—and adopted a wide range of Romantic performance techniques. My aim was not a direct imitation of historical recordings, but to open myself up to the wider panorama of interpretative possibilities within this wonderful music.”

The recording features the great Chopin Sonatas and the Barcarolle, along with two rarities: Busoni’s dramatic reworking of the “Heroic” Polonaise, and a hauntingly nostalgic version of the Chopin/Liszt 'My Joys', played according to Liszt student Bernhard Stavenhagen’s “personal memories of Liszt”. The CD is accompanied by Hamilton’s own detailed notes on the pieces and their performance.

For more details of this recording, please download the CD booklet.

Described after a concerto performance with the St Petersburg State Symphony Orchestra as “an outstanding virtuoso- one of the finest players of his generation” (Moscow Kommersant), by the Singapore Straits Times as "a formidable virtuoso", by Tom Service in The Guardian as “pianist, author, lecturer and all-round virtuoso”, Scottish pianist Kenneth Hamilton performs worldwide as a recitalist, concerto soloist and broadcaster. He has appeared frequently on radio and television in Britain, the US, Germany, France, Singapore, Canada, Australia, Turkey, China and Russia, including a performance of Chopin’s first piano concerto with the Istanbul Chamber Orchestra on Turkish Television, and a dual role as pianist and presenter for the television programme 'Mendelssohn in Scotland', broadcast in Europe and the US by Deutsche Welle Channel. He is a familiar presence on BBC Radio 3, and has numerous international festival engagements to his credit.

Kenneth Hamilton is Head of the School of Music at Cardiff University in Wales, UK. He himself was a student of Lawrence Glover and Ronald Stevenson, the latter of whom inspired his interest in the history of piano performance. Hamilton is especially fascinated by the captivatingly varied performance styles of the pianistic “Golden Age” from Liszt to Paderewski, which constitute for him a well of stimulating artistic ideas, rather than models for exact imitation, a position argued in his book, 'After the Golden Age: Romantic Pianism and Modern Performance' (Oxford University Press). This was a classical music best-seller, welcomed as “full of wit and interest, and written with passion” by Charles Rosen (Times Literary Supplement), and as a “deft and sympathetic account of the old school virtuosos” by Alex Ross (The New Yorker). It was a Daily Telegraph Book of the Year in the UK, a recipient of an ARSC award, and a CHOICE Outstanding Academic Title in the US.