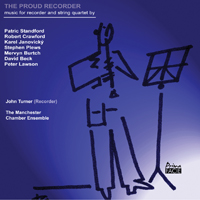 The substantial works on this disc show that composers can write for the recorder in a serious context, despite its well-known limitations of dynamic inflexibility and limited range, successfully exploiting those characteristics to produce music of depth and emotion. Other works on this disc are individual responses to the nature of the instrument, ranging from the quirkiness of modern jazz and minimalism to a well known folk tune transmuted into a heartfelt small tone poem, and the playfulness and circus humour of deft changes of different sizes of recorder.