Russian Tableaux (1970)
Snowfall in Suzdal
Kolomenskoe on a cloudy day 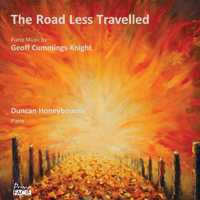 "...this splendid CD"; "...the recording by Prima Facie is superb"; "Honeybourne [...] is clearly a splendid advocate and champion of this piano music"; "For anyone who enjoys approachable, romantically tinged music [...] this is a perfect investment" John France, MusicWeb International

"This CD will appeal to all those who enjoy complex deeply expressive piano music." "...pianistic callisthenics, big chords, virtuoso runs and ripples remind one of Rachmaninoff. All these are certainly there, and with his seasoned technical abilities, Duncan Honeybourne is the man to deliver these with stylistic élan." Alan Cooper, British Music Society

"I am particularly proud to be involved with another exciting and worthy project energised by my friend and colleague, pianist Duncan Honeybourne. Duncan approached me to record piano music by Geoff Cummings-Knight. There was a degree of urgency to this as Geoff was in very poor health; his wife and many supporters were keen that there was a record of this esteemed composer's work. Having now recorded Geoff's music I agree with Duncan that it is both lyrical and contemporary, and fits in with the philosphy of my Prima Facie label, namely to promote and preserve British Contemporary Music. "
Steve Plews

For information about the compositions on this CD, please read Duncan Honeybourne's sleeve notes on the Prima Facie blog.

Geoff Cummings-Knight was born in Colwyn Bay in 1947. A strong urge to compose first exhibited itself at the age of eight, and by the age of eighteen Geoff had completed 18 piano sonatas, most of which have since been destroyed. He later studied music at the Birmingham School of Music (now the Royal Birmingham Conservatoire), Goldsmith's College and Leeds University, and his numerous compositions include a symphony, a piano concerto, chamber works, songs, choral settings and stage works. In 1986 Geoff was a finalist in the Barclaycard Composer of the Year competition and in 1998 his work was featured in the TV series "Heartland FM". His works have been widely performed and broadcast on BBC Radio 3, and his Piano Concerto, premiered in 1985 by Philip Challis and the Worthing Symphony Orchestra, received a further acclaimed performance in Birmingham's Adrian Boult Hall. As a teacher of music and drama for over thirty years, Geoff composed several musicals and cantatas for schools, plus a full-scale drama concerning the true story behind Shakespeare's "Merchant of Venice”. Geoff is also a successful radio presenter, responsible for many hundreds of classical radio programmes on all manner of subjects.