"The sound quality is beyond reproach... I thoroughly enjoyed this recital. Duncan Honeybourne is an unmistakably powerful advocate of Richard Francis's piano music. All the music here is approachable and easily enjoyed." John France, MusicWeb International 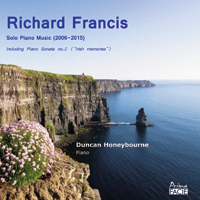 Prima Facie’s release of recent piano music by Richard Francis celebrates the craftsmanship, wit and eclecticism of this popular Shropshire composer, winner of the 2001 Gregynog International Composition Award. The disc comprises Francis’s complete solo piano output from the years 2006-2015, all played by its dedicatee, Duncan Honeybourne, whose previous Prima Facie discs - of piano music of Sadie Harrison and John Joubert - have met with critical acclaim.

Duncan Honeybourne plays here the 'Piano Sonata no.2 (Irish Memories)', with its references to Irish folk melodies, premiered in Christ Church Cathedral, Waterford, in 2011. The first movement evokes a Donegal storm whilst the second is a set of variations on the much-loved hymn tune Slane. The 'Grand Concert Variations' are inventive and virtuosic, while the set of 10 'More Characteristic Pieces' must surely contain something for everyone, ranging from the touching 'Evensong' to the rumbustious 'Seaside Jaunt'!

This attractive and varied disc was recorded on a Bosendorfer piano in the Ty Cerdd studio at Cardiff Bay, in April 2019.

Richard Francis graduated with distinction from the Birmingham School of Music (now the Royal Birmingham Conservatoire) and studied composition with William Mathias at the University of North Wales, Bangor, where he was awarded an MMus degree. He was Organist of Ludlow Parish Church for 30 years and has given many recitals at home and abroad. Francis has developed a vibrant international profile as a composer, and is best known for his organ and choral works, many of which have been recorded to great critical acclaim. “I would gladly play or listen to any of the pieces”, wrote David Saint in Organists Review of a 2-disc set of Francis’s organ music recorded at Liverpool Metropolitan Cathedral.