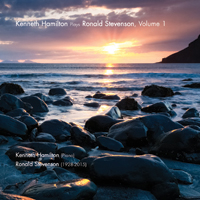 "Hamilton brings exactly the right degree of control to the unstoppable streams of musical ideas, without ever compromising their energy or technical brilliance." Andrew Clements, The Guardian
"Hamilton has both the insight and the facility to bring every corner of his teacher’s music to life. The recording is a pure joy to hear." Adam Fergler
"Played with understanding and brilliance…An excellent starting point for anyone new to Stevenson’s music." Andrew McGregor, BBC Radio 3 Record Review
"gorgeous recording and excellent performance... Kenneth Hamilton’s ravishing tone (on a superior Steinway), sumptuously recorded, is part of the treat. His sensitivity of phrasing, here and elsewhere, is deeply satisfying. Can we have more of this marvelous music, please?" American Record Guide
"...a gorgeous recording and excellent performance…Kenneth Hamilton’s sumptuous tone is part of the treat." Jack Sullivan, American Record Review
"All the pieces are tackled with real passion. This is an unmissable disc, and one waits impatiently for Volume Two." Colin Clarke, Fanfare
"Hamilton presents this fascinating music with power, passion and precision." Peter Burwasser, Fanfare
"A splendid introduction to those unfamiliar with this composer…Strongly Recommended." Guy Rickards, Musical Opinion
"Kenneth Hamilton is quite magnificent…One marvels at Stevenson’s creative genius, particularly in performances as fine as these." Bruce Reader, The Classical Reviewer
"A welcome addition to the catalogue of new recordings of piano works by a 20th-century musical treasure...Hamilton is a sensitive advocate with an obvious love for this music." Matthew Swan, McAlister Matheson Music
"A most enjoyable disc... robust and sweepingly romantic in the more bravura works, charming and witty in the shorter pieces." Frances Wilson, The Cross-Eyed Pianist
"This is a lovely recital...Kenneth Hamilton is completely in tune with Ronald Stevenson's style, and fully equal to the bravura demands of the music." Robert Hugill, Planet Hugill
"An excellent introduction to Stevenson’s contrapuntally complex yet accessible style…a revelatory and enriching listen" Dr Chang Tou Liang, Straits Times, Singapore
"I relished this first volume of Kenneth Hamilton’s exploration of Ronald Stevenson’s music...Based on the imaginative, inspiring and technically demanding performances on this present disc, I do hope that ‘Volume 1’ is the first of a large edition of Ronald Stevenson’s piano music." John France, MusicWeb International
"This CD has found its ideal interpreter in Kenneth Hamilton: always technically masterful, sensitive, kindred in spirit to Stevenson˙s own recordings, and supported by a recording team who have provided a colourful, somewhat compact piano sound that suits the music well." Dr Hartmut Hein, Klassik.com
"The fascination of this music can be credited above all to its interpreter Kenneth Hamilton. In these pieces from Stevenson’s various creative phases he provides the ultimate in energetic impact, taut tempi and gripping creative command. Hamilton, a Scottish compatriot, seems virtually to be a soul-mate of the creator of this music " Stefan Pieper, Klassik Heute

Listen to 'Conducting Conversations', a Radio 95.9 FM WCRI podcast, featuring Kenneth Hamilton and with extracts from this CD:

Prima Facie has long been keen to record the powerful and multifarious music of Ronald Stevenson. Producer Steve Plews accordingly seized the opportunity when he met pianist Kenneth Hamilton, a former student and colleague of Stevenson's who plays his works with passion and conviction. Hamilton explains the background to this fascinating and timely CD, the first volume of a collection that includes several première recordings:

"I first heard of Ronald Stevenson when I was still a student. Lawrence Glover, my piano teacher at the then Royal Scottish Academy of Music in Glasgow (now Royal Conservatoire of Scotland) was a great friend of Stevenson’s, and mentioned him frequently during lessons, speaking with something akin to awe of his “astonishing keyboard mastery” and encyclopaedic awareness of the arcana of Romantic pianism. When I played Balakirev’s Oriental Fantasy Islamey to Lawrence, his immediate reaction was “Ronald Stevenson will really have to hear this!”.

By this time, Stevenson was already a respected but contentious figure in the cultural life of Scotland and the UK as a whole. His multifarious musical passions, the wide scope of his output, and his outright rejection of the more alienating elements of contemporary Western composition had led him to be labelled by some as a neo-Romantic reactionary (especially ironic, given his left wing social and political views) or even as a socialist-realist composer (which at least took into account these views). Born in Blackburn, Lancashire, in 1928, of Scottish and Welsh working-class stock, he had studied at the then Royal Manchester College of Music, moved to Scotland in 1952 with his wife, Marjorie, and thereafter strongly identified with his Celtic heritage.

But he had been born out of his time, as the aesthetic winds were then blowing in a direction that he found distinctly uncongenial. A generation of students from the same College only a few years younger than Stevenson, most prominently Harrison Birtwistle and Peter Maxwell Davies (both born in 1934), would go on to represent the so-called New Manchester School of musical modernism, while Stevenson carried on in a decidedly different vein. Despite this, the sheer scope, power and mastery of his Passacaglia on DSCH (1963) finally brought him international recognition.

It was not until 1990 that I actually met Stevenson himself in his cottage in West Linton, near Edinburgh, after an introduction brokered by the actor, writer and convivial polymath Derek Watson, who lived in the same village. By then I was keen to meet Stevenson not just because of his legendary pianistic prowess, but also because of his compositions. I had recently come across a recording by Stevenson himself of his magisterial Passacaglia, and had been stunned by both the piece and the playing.

Stevenson proved personally to be as generous and many-sided as his music, a fundamentally Lisztian figure transplanted into the late 20th century- although he physically rather resembled Paderewski, another of his great enthusiasms. To complete the quartet of artistic affinities, we should also add the names of Ferruccio Busoni and Percy Grainger. Stevenson studied and played the music of both these composers with a fervour amounting to obsession, and they had an ineluctable influence on his own artistry."

For more details of this recording, please download the CD booklet.

Described after a concerto performance as "an outstanding virtuoso - one of the finest players of his generation" (Moscow Kommersant), by the New York Times as a performer "of energy and wit", and by Tom Service in The Guardian as "an all-round virtuoso“, Kenneth Hamilton performs worldwide as a recitalist, and broadcasts regularly on the BBC. Kenneth Hamilton is also well known as a writer on music. His award-winning 'After the Golden Age: Romantic Pianism and Modern Performance' (Oxford University Press) was welcomed as "full of wit and interest, and written with passion" by Charles Rosen in The Times Literary Supplement, and as "a wonderful book" by James Fenton in The Guardian. Hamilton is Head of Cardiff University School of Music in Wales, UK.