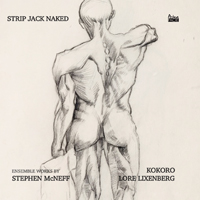 This new CD features ensemble works by Stephen McNeff (born 1951), composed primarily for Kokoro, the Bournemouth Symphony Orchestra’s new music ensemble, conducted by its Principal Conductor and Artistic Adviser, Mark Forkgen, during McNeff’s tenure as resident composer to the BSO from 2005 - 2008. It is a companion CD to a disc of McNeff’s orchestral and choral/orchestral works composed during his BSO residency, released on the Dutton label.

The CD comprises four works, of which 'Strip Jack Naked' is described by the composer as a ‘contemporary comedy opera’. Composed 2006-7, rev 2016, it was conceived for the mezzo-soprano Loré Lixenberg. Following an idea of Lixenberg’s, McNeff asked comedy actor and writer Vicki Pepperdine to become involved, leading to the three of them, McNeff recalls "getting together in a room in a South London pub where Vicki videoed a “stream of consciousness” interview with Loré– a bizarre event during which the persona of Loré’s character gradually emerged." From this Pepperdine fashioned her text, its storyline best summarised in its character’s words: "You wake up on the morning of your birthday and realise people are trying to tell you something ... they don’t much like the way you look any more. But it’s nothing that a bit of body resculpting surgery can’t sort out." For this recording McNeff created a Song Suite including most of the songs.

In 2007, McNeff composed a curtain-raiser for Kokoro titled 'Counting (One)', which he expanded later the same year by composing two additional movements for the Royal Liverpool Philharmonic Orchestra’s new music ensemble, 10/10, and retitling it 'Counting (Two)'. Framed by rhythmically vigorous outer movements, the threnody-like second, headed ‘Doppo il Cimitero Inglese, Val di Sangro’, was inspired by a visit to the British war cemetery near Abruzzo, Italy, and its over 2500 grave stiles.

The 'Four Van Gogh Chalks' (2012) was inspired by McNeff’s fascination in the Dutch master who, McNeff comments, "drew in chalk throughout his adult life and regarded drawing and sketching as an essential activity for an artist." Choosing four contrasted sketches, McNeff’s aim was "to capture in music some of Van Gogh’s lightness of touch in a brief though lively and flexible medium." 'LUX' (2007-8) was"‘inspired by light- in particular the way light changes subtly and slowly even as you watch it and is never the same twice." Scored for octet, it enabled the composer to expand on his "palette considerably and call on colouristic effects from the instruments."

For further details of this recording, please see the CD booklet and the libretto.

Blessed with an instinctive dramatic flair, the backbone of Stephen McNeff’s achievement is to be found in his stage works, including the operas 'Tarka' (2005-6), winner of the 2007 British Composer Award for Best Stage Work; 'Clockwork' (2004), and 'Banished' (2017) for Trinity Laban; for dance, 'Seven for a Secret' (2007), was a Rambert commission.

McNeff established his name through his many scores for Unicorn Theatre, including the frequently performed 'Beatrix Potter Suite' in 2002, and his music for windband, for instance, 'Ghosts' (2001). From 2005 to 2007 he was the first ap-pointee of the Royal Philharmonic Society / Performing Right Society Foundation’s ‘Composer-in-the-House’ scheme, working with the Bournemouth Symphony Orchestra.

Works composed for the BSO included 'Secret Destinations' (2005-6) and 'Weathers' for chorus & orchestra (2007), which were recorded by Dutton (4* BBC Music Magazine). This Pima Facie recording reflects McNeff’s close association with the BSO’s new music ensemble, Kokoro, which continued with the BCA nominated opera / oratorio 'The Chalk Legends' (2012), and the opera 'The Burning Boy', to a libretto by Charles Causley, premiered in 2017.

Other orchestral works include his percussion concerto, 'ConcertO Duo', jointly commissioned by the Borletti Buitoni Trust and BBC Radio 3, first performed by the BBC Symphony Orchestra in 2010. A further BBC commission, 'Eden Rock', was premiered by Mark Padmore and Morgan Szymanski in 2017. Other choral works include 'A Half Darkness' (2016), commissioned by Chamber Choir Ireland and 'The Walking Shadows' (2018), premiered by the London Concert Choir, conducted by Mark Forkgen.