Celebrating the music of Teppo Hauta-aho

'Typically Teppo' features the music of the legendary Finnish bassist- composer Teppo Hauta-aho alongside works composed to celebrate his 75th birthday at Teppo-Fest (UK) in May 2016. The international project includes five performers from four countries and composers from six countries in a unique CD that celebrates the music of Teppo Hauta-aho, noting his influence on bassists and composers across the world. 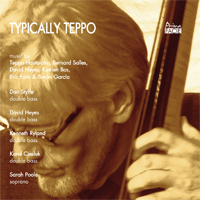 Teppo Hauta-aho was born in 1941 and is the most prolific composer in the history of the double bass. He has composed more than 300 works for every ability level and his unique sound-world, influenced by classical styles alongside jazz, contemporary and improvisation, produces a rich palette of atmospheric colours, textures and timbres.

'Two Dances' for double bass quartet employ waltz and reggae styles within a modern but accessible idiom and 'Elegy-Fantasy in Memory of David Walter', a ‘tour de force’ for double bass quartet, is a seventeen minute tone poem of momentous breadth and imagination, unlike anything else in the quartet repertoire. The bleak, expansive landscapes of his native Finland are captured in the music.

' Trio Poem Basso II' for double bass trio features jazz styles whilst 'Dan’s Gasparo' and 'Dan’s Gasparo Ballade', both for unaccompanied double bass, were composed to celebrate the glorious tone and solo qualities of Dan Styffe’s unique and priceless double bass, made in Brescia (Italy) in the 1580s by Gasparo da Saló. Modern techniques and influences are used, but within a lyrical framework.

The five colourful and effective miniatures by Bernard Salles (France) are contrasted by 'Northern Lights' by Simón García (Spain), which is played almost exclusively in harmonics, with 'Aria' by Eric Funk (USA) and 'Finnish Sketches' by David Heyes (UK), both for unaccompanied double bass, emphasising the tonal and sonorous qualities of the 21st-century double bass.

Teppo Hauta-aho (born 1941) is the most prolific double bass composer of our time and since the 1970s has composed more than 300 works for the instrument. He played with the Helsinki Phil- harmonic between 1965 and 1972, and the Finnish Opera Orchestra from 1975 to 2000. Finnish compos- er Harry Wessman writes: "As a composer, Teppo Hauta-aho has always been his own teacher, basing his technical knowledge on his wide practical musicianship as an orchestral player, chamber and jazz musician. It would not be an exaggeration to claim that he was the jazz bassist most in demand in Fin- land in the 1970s, and a few of his works are pure jazz compositions. But the compositional techniques and musical means used in the majority of his works originate in an unusual openness for any devices. Along with modern techniques, his source of inspiration include all the previous stylistic periods in Euro- pean music, impulses from Oriental music and, of course, jazz. His own instrument, the double bass, has profited especially from his rich inventiveness in finding new means to conjure forth unusual sounds from the instrument, and in applying them in an artistically meaningful and striking way." Hauta-aho's music has been performed extensively in Finland and abroad, notably in America, Britain, Germany, France, Czech Republic, Italy, Soviet Union, Australia and Switzerland. His most famous work Kadenza (1978) has achieved cult-like status, recognised universally as a 20th-century classic, and is the most performed contemporary work for double bass.