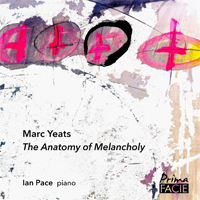 "Ian Pace is a phenomenal pianist, a man whose musicality and intellect I have admired for many years. I have heard him fearlessly play some of the most challenging music of our time with huge flair, passion, insight and musicality. I’ve been writing piano music since 1997 and over the years have built up a substantial catalogue of works, many of the pieces highly ambitious and virtuosic beyond normal pianistic expectations. I have dedicated many of these pieces to prominent international pianists, but across the years – due to a number of factors, mainly around the music’s enormous challenges – only a tiny handful of the pieces (often the least frightening and shortest of them) have been performed live, and until now, none were recorded. In this amazing collaboration with Ian, for the first time, I have found a pianist who not only enjoys and can meet these musical challenges but is a pianist who actually wants to perform this work because of the very nature of the writing itself.

This album is the first recorded collection of my piano works, ranging from 1997 to the present day, and includes pieces deemed by many pianists to be too challenging to play. The recording of this album has been made possible through the amazing generosity and support of over 120 people through a crowdfunding campaign initiated by Sound and Music’s ‘Compose, Curate, Engage’ initiative. Ian and I would like to acknowledge our deepest gratitude to everyone who pre-ordered the album, ordered our exclusives, donated, sponsored and supported the project from the outset. We couldn’t have achieved this without them."
Marc Yeats

Composer and visual artist Marc Yeats has gained international renown over the last 20 years, through commissions and performances by orchestras and ensembles such as The Halle, London Sinfonietta, BBC and Tokyo City Philharmonics, New York Miniaturists Ensemble and many more. His work has often been featured in BBC broadcast commissions, as well as in Germany, the US, New Zealand and elsewhere. The chance to be one of just ten participants at the famous Hoy Summer School introduced him to the legendary Sir Peter Maxwell Davis, who maintained a keen interest in Marc’s career until his death in 2016. Among Marc’s many compositions are I See Blue (his first orchestral work), the round and square art of memory for piano and orchestra (BBC Philharmonic commission) and My Blood Is As Red As Yours commissioned by The Halle to celebrate World Aids Day 2008. Today, positioned as a leading contemporary composer, Marc continues to expand his musical horizons in work with mobile technologies, as well as researching and developing a range of unique approaches to polytemporal composition. He is published by Composers Edition.

Ian Pace is internationally renowned as a leading performer of new music, having given over 300 world premieres, played in 25 countries, and recorded over 30 CDs. Amongst the composers who have written works for him to premiere are Gilbert Amy, Julian Anderson, Richard Barrett, James Dillon, Pascal Dusapin, Brian Ferneyhough, Michael Finnissy and Walter Zimmermann. He studied at Chetham’s School of Music, Oxford University, and the Juilliard School with Hungarian pianist György Sándor, later taking a PhD at Cardiff University. He is also a musicologist, and taught at the universities of Southampton and Dartington College before City, University of London, where he is currently Head of Performance and PhD Programme Director. His research encompasses historical and analytical musicology, as well as the study of performance practice, modernist aesthetics, music and culture under fascism, and especially music in twentieth-century Germany. Forthcoming books include monographs on music in Weimar and post-war Germany, a history of specialist music education in Britain, and edited volumes in Writing on Contemporary Musicians and Rethinking Contemporary Musicologies, while forthcoming recordings include the complete piano works of Brian Ferneyhough and John Cage’s Music of Changes.