"A rewarding recording of a rich and complex work which will bring enjoyment to many, and not just to Tolkien fans." Stuart Sillitoe, MusicWeb International

Following the successful release of 'The Fall of Gondolin', the closing segment of the series of ‘epic scenes’ drawn from J R R Tolkien’s posthumous writings for The Silmarillion, Prima Facie Records in collaboration with Volante Opera Productions now presents a recording on 2 CDs of 'Beren and Lúthien', Part Two of Paul Corfield Godfrey’s cycle written during the period 1982-97 and employing a large variety of posthumously published texts by the author with the permission of the Tolkien Estate. The cycle, extending in performance over four evenings, is the largest-scale work of classical music written in Wales in the twentieth century, demanding a full roster of solo singers, chorus and orchestra, but has only ever been performed in excerpts until now. ​ 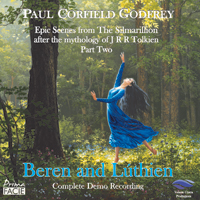 As before, the singers are all professional artists from Welsh National Opera, and the sets make available for the first time a fully representative recording of the music with the complete lyrics by Tolkien. Because of budgetary and other constraints, the orchestra is represented by sampled sets (using the sounds of real instruments) which have been carefully balanced and adjusted in collaboration with the composer to obtain as close a result to the sound of an actual orchestra as possible. Commenting on this aspect, Brian Wilson in a review of The Fall of Gondolin for Music Web International remarked “I wondered how well this would work, but need have had no apprehensions; it works very well and it’s the only way such a project could have been realised. I need only say that the music is often hauntingly beautiful.” ​

The booklet with this set of Beren and Lúthien explains the methods of production in greater detail, and also includes an essay by the composer on the manner in which the author’s text has been adapted for music. Chris Seeman, reviewing The Fall of Gondolin for the Tolkien Music Website, remarked that the work “delivers nearly two hours of pure Tolkienian epic – Tolkienian not simply by virtue of its subject matter but more importantly by its libretto, which is 100% Tolkien’s own text. Or rather texts. In order to flesh out each essential movement of the story, Godfrey has made eclectic use of a variety of texts pertaining to the tale, much as the published Silmarillion was synthesised by Christopher Tolkien from the different manuscripts available to him.” He described the set as “a superb rendition of an unparalleled story [whose] greatest virtue lies in its ability to enhance rather than overshadow that story.”

Production and engineering: Volante Opera ©2019
Productions Artwork for the release provided by Ted Nasmith. ​
All artists appear by arrangement with Welsh National Opera. ​