"This is an excellent CD of chamber music by David Ellis. His work is accessible, typically enjoyable and always well written... this present disc offers several interesting and satisfying works, all of which are played and sung to perfection." John France, MusicWeb International 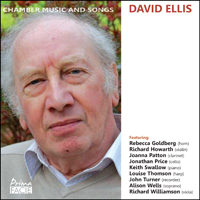 The music of David Ellis may have been somewhat eclipsed by that of his fellow contemporaries at the Royal Manchester College of Music, Birtwistle, Goehr and Maxwell Davies, but he had an extremely distinguished career as music producer and subsequently Head of Music for the BBC North Region, which left limited time for composition. In his earlier years he had won numerous awards for his music, including the Royal Philharmonic Prize, the Royal College of Music Patrons’ Award, and the Ricordi Prize. Following his retirement from the BBC he continued in musical administration as Artistic Director of the Northern Chamber Orchestra and subsequently worked in Portugal, helping with the founding of the Orquestra Sinfonica Portuguesa. Latterly he has devoted himself to composition, with a distinguished addition to his catalogue of chamber music, orchestral works and choral music. This release includes a first recording, under the composer’s own direction, of his two magical harp trios, one with violin and horn, and the other with viola and recorder. The disc also includes a suite of encores for solo recorder, made in the same sessions. Other works on this CD appeared on the disc 'Images of Truth', no longer available, which was made for the composer's 65th birthday in 1998.

Keith Elcombe (harpsichord) was University Organist and Senior Lecturer in Music at Manchester University, as well as being a choral conductor and a distinguished recitalist on both organ and harpsichord.

Rebecca Goldberg (horn) has had an exciting and varied playing career specialising in contemporary music and historical instruments. Senior Tutor at the Royal Northern College of Music and Royal Conservatoire of Scotland, Beccy also works in Lifestyle Medicine and Confidence Coaching from her smallholding in the beautiful Loch Lomond district.

Richard Howarth (violin) has had a long and varied career as a violinist and now as a conductor. He worked with many UK orchestras mostly in the leader’s chair and latterly enjoyed performing chamber music with his friends in Manchester Camerata. Conducting non-professional orchestras is now his main focus and he is associated with six wonderfully diverse groups.

Joanna Patton (clarinet) now plays with the CBSO as well as having a distinguished solo and chamber music career. She has performed most of her instrument’s standard concerto repertoire with leading orchestras.

Keith Swallow (piano) The most sensitive of accompanists, Keith was the pianist of choice for many distinguished singers, including the late Owen Brannigan and Alfreda Hodgson.

Louise Thomson (harp). A versatile and experienced musician, Louise’s playing has taken her to many prestigious concert venues around the UK including the Royal Albert Hall, St David’s Hall and Bridgewater Hall.

John Turner (recorder) is one of today’s leading exponents of his instrument, with over 600 premieres and some 70 recordings to his credit. His compositions have for many years been part of the instrument’s standard repertoire.

Alison Wells (soprano) is noted for her remarkable musicianship and outstanding vocal dexterity, which made her one of the most highly regarded singers of contemporary repertoire with several of the outstanding music groups in Europe. She is equally at home in classical repertoire from Mozart to Mahler.

David Ellis, born in Liverpool in 1933, was a pupil at the Liverpool Institute before continuing his studies at the Royal Manchester College of Music from 1953-1957, a significant period in British contemporary music - among his fellow students were Peter Maxwell Davies, Harrison Birtwistle, Elgar Howarth, Alexander Goehr and John Ogdon, who together formed the ground-breaking New Music Manchester Group. It was at this time that his compositions gained recognition, not only through performances, but also in the form of commissions and awards: the Royal Philharmonic Prize, the Royal College of Music Patrons' Award, the Theodore Holland Award, the Royal Manchester Institution Silver Medal, the Ricordi Prize and a Gulbenkian Award.

From 1964 he worked at the BBC as a Music Producer, initially having the responsibility for programme planning and administration of the BBC Philharmonic, and subsequently also for the development of the orchestra's international profile. In 1977 he became Head of Music, BBC North, leaving in 1986 when he was appointed Artistic Director and Composer-in-Residence to the Northern Chamber Orchestra.

In 1994 he moved to Portugal, working with the newly-established Orquestra Sinfonica Portuguesa in Lisbon as Assistant to the Director of Music and Chief Conductor, Alvaro Cassuto. He returned to the UK to devote himself exclusively to composition, with time set aside for CD production work in a variety of interesting repertoire, both classical and contemporary - the result of his association initially with Naxos and ASC Records, and later with several important independent international labels.

Apart from performances by many organisations in the U.K., his music has been played and broadcast with considerable success in Canada, the U.S.A., Israel, Portugal, Denmark, Brazil, Australia, China, and throughout Europe in more recent years.