The chamber music represented on this album spans a 30 year period from the solo alto flute piece 'Elegy' in 1984, to The Courting Rites of Cranes trio for flute, viola and harp, written in 2013. All the works recorded not only share Michael Parkin's distinctive musical voice, but also his artistic and compositional aesthetic; the absolute centrality of melodic expression, and an insistence on narrative, never ‘programmatic’, but always moving dramatically forward in time.

“...a composer who takes serious delight in the power to be eloquent and ragingly intense.” Nigel Jarrett 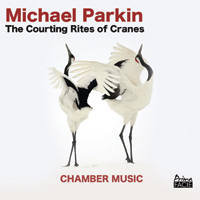 Inspiration for the works on the album is wide ranging and sometimes surprising; often from non-European sources. The solo alto flute piece 'Elegy' is based on an original recording of a young pygmy girl singing that a friend of his brought back from Africa; 'Inevitable Inventions for violin and piano' makes use of Japanese and Javanese scales, whilst the solo flute piece 'Where the Waves Rise' derives from a Portuguese melody found in the 13th. century pilgrimage music to Santiago in Spain. The title track, 'The Courting Rites of Cranes' for flute, viola and harp, was written to celebrate a wedding anniversary, and takes its inspiration from the Japanese tradition which venerates the crane’s longevity and lifelong bond to their partners.

The musicians performing on the recording range from performers with established international reputations such as Ian Pace (piano) and Matthew Jones (violin/viola), to some of the upcoming stars of the future such as Christopher Terapin (cello) and Epsie Thompson (flutes).

“Epsie Thompson is wonderfully atmospheric, coping with passages of fluttertongue, quarter-tones and so on with poise and deceptive ease.” Paul Godfrey

Michael Parkin’s work has been broadcast and widely performed in Britain, Europe and the U.S. Prizes include the Yorkshire Arts Young Composers’ Competition , the MidNAG award and his work Elegy for solo flute was one of only two British works selected for the 1984 Gaudeamus International Musicweek in the Netherlands. Inevitable Inventions was awarded first prize in the 1996 Match TM Composition Award. In 2006 he received a prestigious Arts Council Creative Wales Award to enable him to write orchestral music. Audiences will be aware of his orchestral music from recent premieres by the BBC National Orchestra of Wales of Still Life and Srebrenica, but his chamber music represents a major part of his varied output which includes 4 string quartets, song collections as well as numerous trios, duos and solos and a substantial body of piano music.