FEANOR SAMPLE ONE: This is an example of the choral work from the end of Scene One where they are describing the beauty of the Elves at the beginning of their time in Middle-earth.
FEANOR SAMPLE 2: In this excerpt from the end of Scene Six Feanor (Simonn Crosby Buttle) has been warned by the Elder King not to pursue his path of vengeance against Morgoth. He defiantly responds...
FEANOR SAMPLE 3: This is the orchestral prelude to Scene Seven which is depicting the Shores of Valinor with the Great Sea to the East.

CD 1
1. Prelude
2. Scene One: In This Time
3. Then Elbereth beheld the darkness
4. And as a blue fire flickered
5. Many waters flowed down thither
6. Scene Two: Last of all
7. This is the counsel of the one
8. This is the noontide
9. Scene Three: In that time was born
10. And it came to pass
11. As three great jewels they were
CD 2
1. Scene Four: And Melkor lusted for the Silmarils
2. Beware! Small love has the proud son of Miriel
3. King and Father
4. Thou speakest of Thraldom
5. Scene Five: Beneath the sheer walls of the mountains
6. Do as I bid
7. As I promised
8. And even as Feanor and Fingolfin stood
9. The Light of the Trees
10. Hearest Thou
11. Blood and darkness
12. Scene Six: Why, O People of the Stars?
13. Be he friend or foe
14. Against the folly
15. Scene Seven: Prelude
16. Others of the Elves
17. You renounce your friendship
18. Then swords were drawn
19. Scene Eight: The way was long
20. Tears unnumbered ye shall shed
20. We have sworn
20. Scene Nine: Blackheart!
20. Now what ships and rowers
20. Epilogue 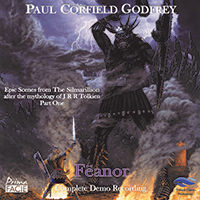 The completion in 1996 of the “epic scenes from The Silmarillion”, a four-part cycle drawn from the posthumous writings of J R R Tolkien, constituted the largest-scale work of classical music written in Wales in the twentieth century. With this landmark release of 'Fëanor', following on from their earlier successful issues of 'Beren and Lúthien', 'The Children of Húrin' and 'The Fall of Gondolin', Prima Facie in collaboration with Volante Opera Productions now completes the recording of that original cycle; and a further episode, 'The War of Wrath', written in 2019-21, is to follow in due course. All of these works employ a variety of posthumously published texts by the author with the permission of the Tolkien Estate. As before, the singers are all professional artists from Welsh National Opera; the booklet explains the methods of production in greater detail, and also includes an essay by the composer on the manner in which the author’s text has been adapted for music. The late Brian Wilson, reviewing The Children of Húrin for MusicWeb International, drew comparisons between the “genuinely epic” music of the cycle and that of Sibelius, Hildegard of Bingen, Vaughan Williams, Holst and Wagner: “It’s a very different ending from that of Götterdämmerung, but it’s worthy of mention in the same sentence – and there’s not much that is, in my book.”

Production and engineering: Volante Opera ©2022
Music published by Zarahustra Music ©2022
Illustrations 'Morgoth and the High King of the Noldor' & 'Ungoliant and the Two Trees' by kind permission of Ted Nasmith ©2022
Synopsis and notes: Volante Opera Productions and Paul Corfield Godfrey ©2022
All artists appear by arrangement with Welsh National Opera