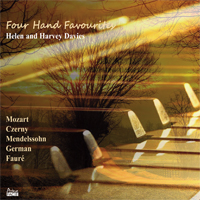 Helen and Harvey Davies have worked together since 1992. As a mother-and-son piano duo, that probably makes them unique in the music profession... Helen and Harvey have developed a large repertoire of standard four-hand works, and have rediscovered many long-forgotten early Romantic works by composers such as Czerny and Hummel. This is work that the Duo continue to this day; indeed, this CD features the world première recording of Czerny’s 'Fantasy on Scottish folk tunes, Op. 467'. Their work as duettists has established them as exponents of contemporary British music. Composers who have written for the Davies Duo include Nicola Lefanu, Richard Stoker, Jeffrey Lewis, John Metcalf, Bill Connor, Brian Hughes, and the Australian composer James Ledger. Pwyll ap Sion composed 'Emyn' for the Duo and it received its first performance at Dolgellau Music Club. In 2004, the year of his 75th birthday, Alun Hoddinott wrote a sonata for them, which was one of the composer’s final works.