"Her playing is sensitive and thoughtful... My abiding memory is that of the final movement in Sounding Strings, the 'Christ Child’s Lullaby', here played with exquisite rhythmic poise and tonal refinement." Geoffrey Atkinson, British Music Society 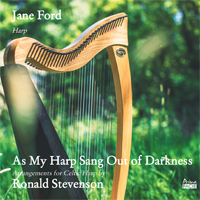 As a pianist, Jane Ford has performed throughout Britain and abroad for solo recitals and concertos, broadcast on television and radio, and won numerous awards in International Competitions. Alongside her performing and recording experience on piano, Jane has performed throughout the UK on her lever harp, celebrating the Celtic History of harp music.

When the terrifying Covid-19 global pandemic hit the Earth in 2020 and Europe entered lock-down, Jane wanted to use her musical experience, talent and imagination to create a very special Harp album, to send out a message of hope and comfort, and to be a light in the darkness during a difficult time.

When selecting repertoire for this album, Jane turned to the outstanding compositions of Ronald Stevenson (1928-2015). With a Scottish father and a Welsh mother, Stevenson was “...keenly aware of his Celtic heritage” (The Stevenson Society) and his Celtic Harp arrangements are a contemporary take on ancient melodies and traditions, providing a thrilling and unique interpretation of traditional tunes from Scotland, Ireland, England, Wales and Brittany.

Recorded and produced entirely behind closed doors, and with contactless distribution of all performances and photography, this beautiful album is testimony to the power of creativity to flourish in the face of disaster. It is also a fitting tribute to the works of a truly Great British Composer and a glorious salute to the Celtic History of the Harp.

Described by the ‘Times’ as ‘gifted’ and by ‘Music and Vision Magazine’ as ‘spellbinding’, Jane Ford is a musician of both passion and sensitivity. Her extensive performing career has included performances throughout Britain and abroad, at venues such as the Palau de la Musica (Valencia), the Palais D’Alan (France) and in London: St John’s Smith Square, St Martin-in-the-Fields and the Purcell Room, where she performed a World Premiere. Jane regularly appears as soloist for concertos, and in recent years has performed Ravel’s Piano Concerto in G, Grieg’s Piano Concerto in A minor, all 5 Beethoven Concertos and Mozart’s ‘Coronation’ Concerto with the St. John’s Festival Orchestra in Chester. Jane has won numerous prizes at International competitions and broadcast on both television and radio, including a recital for BBC Radio 3.