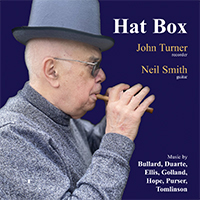 The main work on this reissue of the original Campion Cameo release is the eponymous Hat Box (Alan Bullard), a celebration of the town of Stockport, home to recorder virtuoso John Turner, to whom (with guitarist Neil Smith) this piece is dedicated. Stockport was formerly the centre of the hat-manufacturing industry and gave its name to the hymn-tune Stockport, written by 18th century Stockport organist John Wainwright for the carol Christians awake, salute the happy morn. The eight hats depicted in this suite refer to phrases from Wainwright’s famous tune.

The rest of this delightful collection for recorder and guitar features works by composers with North-West connections, such as David Ellis and John Golland, and other friends of John’s who enjoy writing for the recorder maestro. Added to this re-release is one new recording, a new composition for solo recorder by Scottish composer John Purser. This is a beautiful, evocative, and haunting work entitled Skye Blue, a musical depiction of the Isle of Skye, where the composer currently resides.

This recording was made with financial assistance from Savoy lnvestment Management Ltd., and Forsyth Brothers Ltd.

You can read more about the CD on the Prima Facie blog, Recitative

Neil Smith started his musical studies at an early age, but trained as a scientist. In his teenage years he was active as a rock and jazz musician before devoting himself to the study of the classical guitar. After study in London with John Duarte and Julian Byzantine, he was awarded a Scott Scholarship to study in Canada in 1975 with Alirio Diaz and Leo Brouwer, and that year established himself as one of Britain's most prominent guitarists. After his Wigmore Hall debut in 1975, concerts followed in Norway, Switzerland and Holland, and he has since built up a following all over the world. In 2000 he was honoured to perform Rodrigo's Concerto de Aranjuez at Glamis Castle for the l00th birthday celebrations for Her Majesty Queen Elizabeth the Queen Mother. His CDs include a recital of the music of John Duarte and a survey of Latin-American guitar music.