“Douglas Finch may derive his inspiration ostensibly from remote places, but what his art radiates is an intensely personal vision. The patterns and textures of his music draw us into a world whose beauty keeps us gently spellbound: this is an endlessly beguiling place to dwell.” - Michael Church, The Independent.

"Fine threads tie the music of the final bars [of 'Ruins'] to its surroundings with a special kind of fragility, filled with longing – an untold story – like an abandoned spider’s web grasping delicately at its surroundings." - Adam Fergler, Without Barlines blog, 22 May 2016.

"... a composer who has developed his own distinctive language with impressive results, creating landscapes that are elusive yet intensely enveloping" - Bruce Reader, ClassicalReviewer blog. 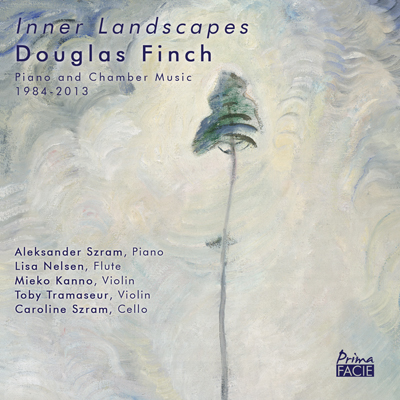 The first ever recording of Douglas Finch's piano and chamber music, 'Inner Landscapes: Piano and Chamber Music 1984-2013' offers an exquisite and compelling portrait of this important Canadian-British composer.

'Inner Landscapes' draws upon the art of the Canadian painter, Emily Carr, whose work features on the CD's cover. In particular, the feelings of “loneliness and quiet rapture” in her paintings drew Finch in, revealing his affinity with the themes of solitude, mourning and spiritual longing. The ten works on this disc each capture an 'inner world' of a particular landscape - in Canada, Germany, North Wales and New York. Douglas Finch is a renowned improviser and pianist as well as composer, and most pieces on this debut CD grew out of ideas resulting from his improvisations.

Performed by the Canadian flautist Lisa Nelsen (“a flautist and a half” - The Times newspaper), the pianist Aleksander Szram, cellist Caroline Szram, and the violinists Mieko Kanno and Toby Tramaseur, the music spans Finch's compositional output from his early 20s, when he lived in Canada, to the present, after he moved to the UK in 1993.

“This music is inward-looking and deeply personal, though the world it looks into is cavernous, elusive and unending, a sound-world quite unlike any that I have so far encountered.” Aleksander Szram, piano.

Douglas Finch is a Canadian pianist and composer.

He has written works for piano, chamber ensemble, orchestra and theatre, as well as five feature-length film soundtracks.

Douglas Finch is Professor of Piano and Composition at Trinity Laban, and a guest teacher at Chetham’s School of Music in Manchester.

Read an interview with Douglas Finch about the making of 'Inner Landscapes'.