This new release is a reissue of a chamber orchestral work with narrator and soloists based upon the Hans Christian Andersen story 'The Nightingale'. Prima Facie continue their support and promotion of lesser-known composers with this beautiful work by composer David Sumbler and librettist Kenneth Hodgkinson.

For straight narration Andersen's original story cannot be improved. This version, however, is more of a transformation into another medium. It was designed to exploit the full resources of the Northern Chamber Orchestra and the soloists on this recording, all of whom gave the first performance of the work in October 1977. Its aim is to interest, on different levels, both the unsophisticated younger listener and the musical adult. For these purposes the original had to be rescripted. The dramatic characters and situations have their counterpart in the development of the musical ideas.

The recording features the Northern Chamber orchestra, with soloists including David Sumbler (flute), Christopher Underwood (baritone) and Alan Cuckston (harpsichord). It is of particular interest that the narrator is Daphne Oxenford. Her best-known role was the voice – "Are you sitting comfortably ...?" – for BBC radio's Listen with Mother from 1950 to 1971! 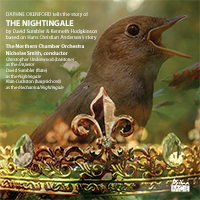 David Sumbler was born in 1947 in Wiltshire. After moving to the north of England he attended Manchester Grammar School, where he took up the flute. He went on to study music at Oxford University before returning to Manchester to enter the Northern School of Music. Here he studied the flute and won prizes for flute playing, composition and general musicianship. He obtained a performance graduate diploma and has a degree in music from Durham University. Having left college, he became a freelance orchestral player. Although now retired, he was for many years principal flute with the Northern Chamber Orchestra, who commissioned 'The Nightingale' from him in 1977.

Kenneth Hodgkinson studied at Pembroke College, Cambridge, and became Senior Classics Master at Altincham Boys Grammar School. He was a keen pianist and wrote both music and scripts for several musical shows. After retirement he spent many years living in his beloved Lake District. He died in 2017.