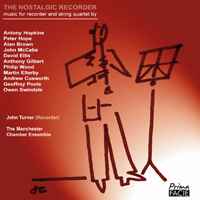 All the music on this disc has a nostalgic quality, often a fond recollection, filtered through modern sensibilities, of music of a past era - renaissance dance music, medieval song, the baroque, the golden age of Hollywood, and English folk music. Other works on this disc refer to close friendships and memories of favourite places - country walks and busy towns and cities.