Passacaglia on a Theme of Benjamin Britten and other Organ Works by Richard Pantcheff (PFCD174/175) £15.00 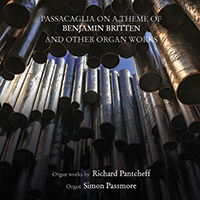 The re-emergence of a fragment of manuscript in Britten’s own handwriting (a theme written for Jean Langlais to improvise upon), unseen for over fifty years, prompted composer Richard Pantcheff to write a Passacaglia on a Theme of Benjamin Britten for organ, in honour of the composer. The work, based on the Langlais theme, was written also in response to a request from organist Jane Parker-Smith for a new organ work for the Britten 100 festival in 2013.

Other recent works appearing on this release include A Sequence for St. George, written for the inauguration of the new Rieger organ at St. George’s Anglican Church in Johannesburg, South Africa. This work, like the later Voces Organi (also included here) is a longer work comprising a number of shorter movements for use during the church’s year. Voces Organi uses plainsong themes as its basis and is written to allow the colours of the organ’s timbre to be vividly heard. This aspect of the work is amply demonstrated in the performance on this release, featuring organist Simon Passmore on the organ of St. Ann’s Church, Manchester.

Given the untimely death of Jane Parker-Smith in June 2020, this two-disc set is dedicated to her memory. She gave several premieres of organ works by Richard Pantcheff, of which the Passacaglia on a Theme of Benjamin Britten is the foremost.

Simon Passmore was born in Hexham, Northumberland in 1990 and began piano lessons at the age of seven, studying with Hexham Abbey’s then directors of music John Green and Michael Haynes and later with Newcastle University’s head of keyboard David Murray. He has given solo piano recitals at numerous festivals across the UK and has featured as a concerto soloist both in the UK and abroad. Simon is currently the Director of Music at St Ann’s Church, Manchester, following in the footsteps of his mentor, Ronald Frost, who held the post for over 38 years and performed over 1000 free recitals. After finishing a BMus at the RNCM, studying with Murray McLachlan, Simon completed the repetiteur course supported by a full scholarship, studying with Kevin Thraves. His awards whilst an undergraduate included the Alfred Clay Prize for the highest final recital mark, the Christopher Duke prize, 1st prize in both EPTA UK and EPTA Belgium competitions, and several prizes for accompaniment.

Richard Pantcheff is internationally renowned as one of the finest contemporary British composers of Choral, Organ, Chamber and Instrumental music. He was trained in choral music and composition from an early age, starting as a chorister at Ripon Cathedral, and thereafter reading music at Christ Church, Oxford, under Simon Preston and Francis Grier. He was mentored in composition by Benjamin Britten in the last years of Britten’s life. Since then he has been commissioned to write new works for the leading performers in their field, including Stephen Layton, Grayston Ives, David Hill, Jane Parker-Smith, and the Johannesburg Philharmonic Orchestra. From 2012-2019 he was Director of Music at St. George’s Anglican Church, Johannesburg, South Africa, where he remains Composer in Residence. He is a Patron of the London Festival of Contemporary Church Music. He is currently guest conductor of the Choir of St. Michael at the Northgate, Oxford, and is occasional guest organist for Ripon College, Oxford. His substantial output of compositions has been commissioned, performed, recorded, and broadcast all over the world. His 2013 work for organ, Passacaglia on a Theme of Benjamin Britten, was premiered in Essen Cathedral by Jane Parker-Smith, as part of the Britten 100 Festival. All of his music has been published, and features in major international music festivals, including the Tanglewood Festival (USA); the London Festival of Contemporary Church Music (UK) and the English Music Festival. His works have been broadcast regularly on radio and TV around the world, including by the PBS (North America), Classic FM (UK and South Africa), BBC Radios 3 and 4 (UK), German radio, and TV in South Africa. His compositions are noted by critics and audiences alike for their originality and technical brilliance, combined with intellectual and emotional depth.