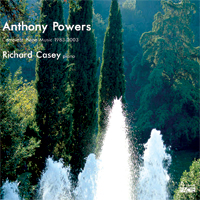 Born in London in 1953, Anthony Powers studied at the universities of Oxford and York, and in Paris with Nadia Boulanger. He taught at Dartington College of Arts before being appointed composer-in-residence to Southern Arts (1980-82). Since then he has lived in Herefordshire and until 2010 taught at Cardiff University. He is a former chairman of the Association of Professional Composers. Powers’ music, most of which is published by Oxford University Press, includes two large-scale symphonies (the first premiered at the 1996 BBC Proms), a number of concertos and other orchestral works, notably the BBC commissions 'Stone, Water, Stars' (BBCSO, 1987) and 'Terrain' (BBCNOW, 1992), vocal and choral works, including 'A Picture of the World' (2001, Warsaw Autumn Festival) for countertenor Michael Chance and the BBC Singers, and the John Donne cantata 'Air and Angels' for the 2003 Three Choirs Festival. His catalogue also includes a large corpus of instrumental and vocal chamber music. Powers’ 'String Quartet no 3' was written as the test piece for the London International String Quartet Competition in 2000. He collaborated with Nobel laureate Seamus Heaney on 'From Station Island' (for speaker, baritone and ensemble), commissioned for a German premiere and broadcast by RTE from the 2005 West Cork Chamber Music Festival with Heaney himself taking the role of speaker. Powers’ work is typically characterised by strong architectonic frameworks that support a language of poetic intensity and magical sonorities, the music often taking its inspiration from the tension between different states, be they physical properties, landscapes, seasons or emotions.

For further details of this recording, please the CD booklet

Richard Casey was born in Manchester in 1966 and started playing the piano at the age of seven. After graduating in Music and Modern Languages at St John’s College, Cambridge, he studied piano at the Royal Northern College of Music with Marjorie Clementi and Martin Roscoe, and later with Ronan O’Hora. In 1997 Richard won first prize in the British Contemporary Piano Competition, an achievement which attracted a series of solo engagements in the UK and abroad. Based in Manchester, Richard complements his solo career with a strong commitment to chamber music. He frequently gives 2-piano concerts with his duo partner, Ian Buckle, specialising in repertoire from the twentieth and twenty-first centuries. Since 1994 he has been pianist with the New Music Players and has performed frequently as a guest with the London Sinfonietta, Lontano and Liverpool-based Ensemble 10:10. Richard was also a founder-member of the Manchester-based contemporary music ensemble Psappha. From 1991 to 2014 he performed over 400 works with the group throughout the UK and in tours of Spain, Holland, Ireland, France, Belgium, Hong Kong, Australia and the USA. Richard has recorded the complete piano works of Camden Reeves, Anthony Gilbert and Sir Peter Maxwell Davies, as well as Edward Cowie’s epic Rutherford’s Lights and Edward Dudley Hughes’ Orchids for solo piano and has recently released Volume 1 of Anthony Burgess’ Piano Works. Richard also teaches at Manchester University. Future plans involve recording the complete piano works of Paul Newland.