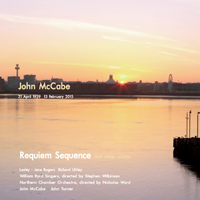 As a composer, John McCabe (1939-2015) enjoyed international stature. 'The Chagall Windows' and 'Notturni Ed Alba' are among his leading works, with much chamber, keyboard and vocal music. 'Cloudcatcher Fells' is considered to be a classic of the brass band repertoire. Among John’s most recent works were the 'Symphony On a Pavane' (London Philharmonic Orchestra), 'Symphony No. 7', 'Labyrinth' (Royal Liverpool Philharmonic) and his Cello Concerto, 'Songlines' (Truls Mork and the Halle).

John was appointed CBE for services to British music in 1985. In 2006 the Incorporated Society of Musicians honoured him with their Distinguished Musician Award. In May 2014 he received the IVOR Award for Classical Music from the British Academy of Songwriters, Composers and Authors, while the Iles Medal was awarded to him in September 2014, for services to the brass band movement.