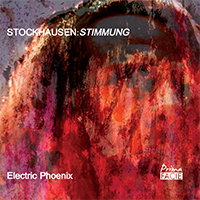 Improvised? – yes, though within strict guidelines laid down by the composer. There are 51 sections – Stockhausen calls them ‘models’ – each led by one of the six singers, and Stockhausen always prescribes which singer comes next. He does not, however, prescribe what music they sing. Sure enough, he has composed the 51 models – very loosely, allowing for improvisation – but the current lead singer is to choose, in real time during performance, which one to do. When a particular lead singer begins her or his chosen model the others have to recognise it and join in. When the lead singer feels this model has gone on long enough she or he hands over to the next lead singer and the music slowly transforms into the next model. When all the models have been sung the piece ends. If the singers happen to be feeling particularly laid-back this could be after some hours. Stockhausen intended Stimmung to be done from memory without scores as a sort of sacramental game. Indeed there is no score, just a wad of unbound sheets containing the 51 models, some erotic poems written by Stockhausen and the names of 77 gods from world religions. The poems are given to specific singers but the gods’ names can be inserted ad lib by any singer who wants to, and when a name is called the other singers have to modify what they are doing to incorporate the sound of the god’s name: all this while chanting a single chord with overtone singing. Performing Stimmung is indeed like playing a game, with amusement and sometimes even hilarity at the unexpected things that turn up. You can be singing a sweet, slow chant when suddenly someone shouts COATLICUÉ! at you (track 5 on this recording) and you have to absorb that into what you’re singing, days of the week, all sorts of seemingly unconnected but curiously apposite interjections.

But when all’s said and done Stimmung is nothing more than a very long drone on a chord of B-flat nine. Six notes. After one performance in Aberdeen, Scotland, a reviewer wrote, ‘Listening to Stimmung is like staring at a brick wall for more than an hour: but how fascinating each brick becomes.’

Electric Phoenix was the brainchild in 1977-8 of four members of the vocal group Swingle II; Linda Hirst, John Potter, Simon Grant and Terry Edwards. Terry was Swingle II's manager and sound projectionist and at first fulfilled the same role in Electric Phoenix; the other three were singers, mezzo-soprano, tenor and bass respectively. With the recruitment of the Canadian soprano Karen Jensen, a post-graduate student at the Royal Academy of Music, the standard quintet format for Electric Phoenix was established and remained the group's basis for the roughly 20 years of its lifespan.

Electric Phoenix was created in order to fulfil a specific and radical ambition: to establish a completely new repertoire, absent from the world of contemporary music at that time, involving the new vocal production pioneered by Berio among others, microphone singing and electronics. This repertoire would radically advance contemporary compositional and vocal techniques; and the development and invention of specific new electronic technology was envisaged in line with the then rapidly-expanding world of synthesis and electro-acoustics. The name Electric Phoenix (Electric because of the intention to sing on microphone and use state-of-the-art electronics and Phoenix because the group saw itself as rising from the ashes of Swingle II) was invented by John Potter.