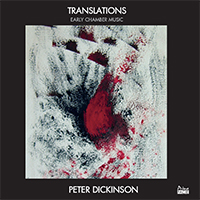 "A welcome addition to several important recordings devoted to Dickinson's music." Music Web International
"This is a thoroughly engaging and very nicely recorded programme of music [...] The performances - all premières aside from 'Threnody' - are first rate, captured in beautifully clear sound. Well worth investigating." Guy Rickards, Musical Opinion.

This disc spans much of Dickinson's career, from his days as a university undergraduate ('Sonatina for Recorder and Piano' (1956) and 'Threnody for cello and piano' (also 1956), the latter first recorded by Penelope Lynex and Alexander Wells) to recent works such as' Waltz For Elliott Schwartz For Piano' (2016), celebrating Schwartz's 80th birthday, and 'Freda’s Blues For Piano' (2016), a tribute to Lady Berkeley (1923- 2016), based on Berkeley's song ‘How Love Came In’. It also includes works written some time ago but only recently performed, such as the 'Fantasy for Clarinet and Piano' (1956), first performed in 2000. The inspiration for the works on this CD is characteristically diverse. For example, 'Lullaby for clarinet and piano' (1967/82) is derived from Dickinson's sketches for an opera called 'The Unicorns', based on a story by John Heath-Stubbs (1918-2006), about two competing countries who wanted to secure unicorns for research. 'Four Duos for cello and flute' (1962), the second movement of which was written in a room with a chiming clock, uses a twelve-note row from Charles Ives’ 'Three Page Sonat'a (1908). The idea for the 'Sonatina for solo bassoon' (1966) emerged whilst the Dickinsons were staying in Paris in a house in which a bassoonist was practising on the top floor. 'Translations for recorder, gamba and harpsichord' (1971) was written for David Munrow, Oliver Brooks and Christopher Hogwood, and includes a range of extended techniques, as Munrow believed that early music instruments should be available to today's composers.

Dickinson is a British composer of the senior generation. There is nothing quite like his idiosyncratic music. ‘Conflicts, juxtapositions, attempted syntheses – Peter Dickinson’s work is full of them, all shook- up, all mixed-up, all jazzed up...yet always keenly imagined and meticulously reasoned and realised.' BBC Proms prospectus. 'This concertos CD displays Dickinson’s ability to write music that is at the same time approachable and challenging. His ability to fuse diverse musical styles is masterly.’ Music Web International. Dickinson had a twenty-five-year recital partnership with his sister, the mezzo-soprano Meriel Dickinson. They gave recitals and broadcasts throughout Europe and they made first recordings of works by American and British composers, including Dickinson’s own song cycles. Dickinson is an Emeritus Professor of two universities - Keele and London. He has always written widely; has given many BBC broadcasts; reviewed extensively for Gramophone; and has published several books – on Lennox Berkeley (two); Billy Mayerl; Aaron Copland; John Cage; Lord Berners; and Samuel Barber. A collection of Dickinson’s writings over a fifty-year period was published as Words and Music in 2016. He is chair of the Bernarr Rainbow Trust. The most important part of Dickinson’s output is his own music which includes everything except opera. There are many recordings by leading performers: this is the first of two CDs of his chamber music released in 2018. Dickinson’s music is published by Novello/Music Sales and Good Music: see www.foxborough.co.uk