Wandering Pathways: Variations for recorder and strings by Leonard Bernstein and others (PFCD091) £12.50

"John Turner is dedicated to promoting recorder music of all eras, but he is specially to be commended for his sterling achievement in introducing many modern works to the repertoire. Wandering Pathways is a splendid collection of music that will interest, amuse, move and satisfy listeners who enjoy this unique instrument." John France, MusicWeb International 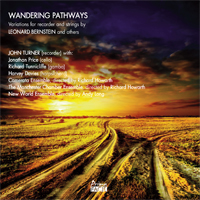