This is the debut CD of Khoros, a choir formed in 2011 by Patrick Allies. In seeking a programme that would best demonstrate the choir’s versatility, Patrick drew together music composed in honour of the Virgin Mary, particularly works that refer to or celebrate some of the many names by which she is known. Such a programme enabled the presentation of music from Plainsong and renaissance polyphony to contemporary, and includes two premiere recordings: Ben Rowarth’s 'Regina caeli' and Libby Croad’s 'To the Immaculate Heart of Mary', commissioned for this disc.

The earliest music in the programme is the Solemn tone plainsong 'Salve Regina'. Hildegard of Bingen’s own mesmerising, flowing plainsong in 'O viridissima virg'a is sung by the women’s voices. From Tudor England, Robert Parsons’ setting of Ave Maria concludes with an Amen of exquisite beauty, and the same Ave Maria text is subtly combined with that of W B Yeats’ poem ‘The Mother of God’ in the vivid and powerful' Mater De'i by Sarah Rimkus. John Taverner’s 'Mother of God, here I stand' sets Lermontov’s humble prayer with profound simplicity. 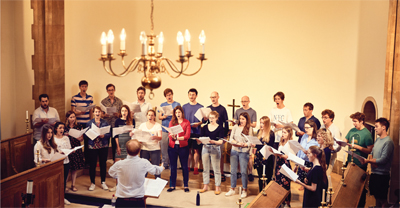 Khoros is a dynamic London-based choir, led by Patrick Allies, that performs repertoire ranging from Renaissance polyphony to new works commissioned from emerging composers. The choir’s members pursue a variety of careers as teachers, lawyers, academics, civil servants and arts administrators, but come together every few months to sing at a high level. Since its first concert in 2011, Khoros has performed at the City of London Festival, the Brandenburg Choral Series, and the National Portrait Gallery, and undertaken successful tours to France and the Republic of Ireland. The choir has been invited to sing services at Westminster Abbey, St George's Chapel Windsor, and Southwark Cathedral. In 2016 Khoros worked with composer Emily Hall on a concert of her work at Union Chapel, as part of Daylight Music. Highlights of the choir’s 2018-19 season included a collaboration with saxophonist Billy Harper for the London Jazz Festival, which was broadcast on BBC Radio 3, and a performance with contemporary music specialists ensemble x.y, funded by the Arts Council.

Recorded on 13-15 July 2019 in the chapel of Downing College, Cambridge
Recording: Steve Plews, assisted by Andrew Mayes
Production: Patrick Allies
Digital editing and mastering: Phil Hardman
Executive Production: Steve Plews and Andrew Mayes
Cover image from Triptych No. 35 of “The Mystic Image”, a set of fifty-one triptychs in pastels on black paper by Tom Walker, inspired by the fifty-one offices of L’Orgue Mystique by Charles Tournemire. Reproduced by kind permission of the artist and the owner, Peter McGeary. For further information visit: https://tomwalkerartist.co.uk/

For further details of this recording, please download the CD booklet

Patrick began his musical education as a chorister at the Temple Church in London, under Stephen Layton. He sang in Gloucester Cathedral Choir before taking up a Choral Scholarship to study Music at King’s College London, graduating in 2010 with First Class Honours. Patrick went on to postgraduate study at the University of Cambridge where he sang in Jesus College Choir. He is currently a PhD student in Musicology at the University of Maryland.

He is Artistic Director of Siglo de Oro, with whom he has recorded two discs with Delphian Records. Of the group’s latest release, BBC Music Magazine wrote that ‘Here is a choir in which all the elements are held in perfect equilibrium. Patrick Allies ponders every note before moulding lines whose suppleness in turn coalesce into a breathing, organic whole.’

Patrick currently divides his time between London and Washington DC. Highlights of the 2018-2019 season in the UK included a performance with Khoros at the London Jazz Festival, and an Arts Council-funded collaboration with contemporary music group ensemble x.y. In the US, Patrick is a staff singer at St Paul’s K Street in Washington DC, and has recently taken up invitations to be a guest conductor at Christ Church Episcopal Church in Rye, New York, and to be a guest conductor and lecturer at Loras College, Iowa.